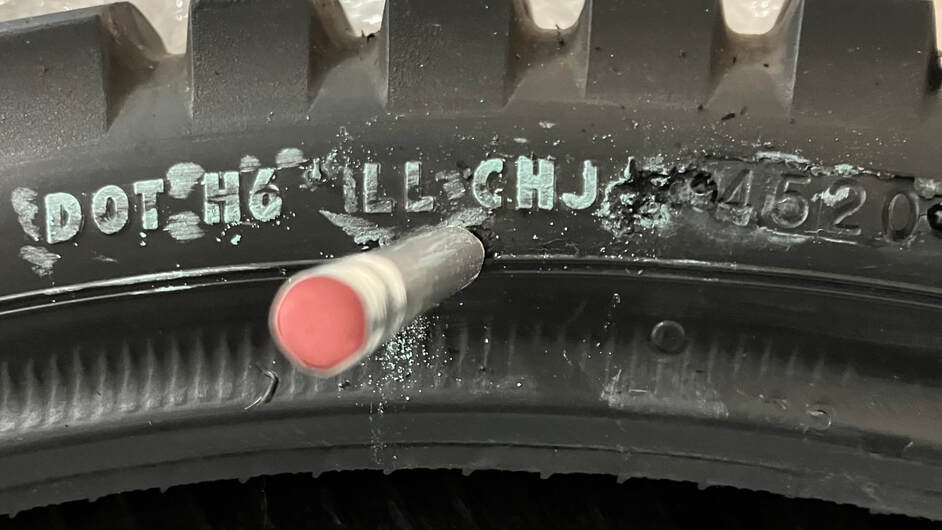 "WHERE I WORK ON MY THUMPER"
... an "Item of the Week" for Pandemic Pursuits official submission...
I took a bunch of pictures but not much came out. Am submitting this one as this week's subject was just about impossible to find.  I guess you have to live way out there where time and progress haven't passed so fast.
- Mystery Man #1   (Alright, the motorcycle might give my identity away...)

AN INQUIRY ASKED IN LAST WEEK'S POST:
STEVE...
YOU TALKED OF OUR FRIEND, BOB, A WEEK OR SO AGO ON THIS MEDIA, REMEMBER ... WHEN WE THREE DINED TOGETHER IN A SMALL TOWN IN YOUR HOME STATE, THOUGH I CANNOT RECALL THE NAME OF THAT TOWN?   I DO, HOWEVER, RECALL WHAT WE ATE ...
DO YOU REMEMBER WHAT WE ATE THAT DAY, WE ALL ATE THE SAME THING?  ANYONE CARE TO GUESS?
AND, SPEAKING OF BONES, OUR MEAL HAD ZERO BONES (HINT)!

ANSWER:  As I recall, you were coming from somewhere east (Missouri? Illinois?) and we met in Tecumseh, Nebraska, home of the state prison.
Your bike was parked on the west side of the road, but you were sitting under some shade trees on the east side.  We both waited for Bob and when he finally got there, we went to the cafe which was closing.
But, being the sweet talker that you are, they let us in and we all had the last of the special of the day, wait for it, L I V E R!  There was some discussion as to who would pay but I think you ending up with the bill.
I had a good ride that day and I'm glad to have met Bob, and that you reminded me of it.    Steve Oakman #1946, #4402, & #5266 - Nebraska

P.S.   I've been looking at the map and could meet you in Summerfield (doesn't that sound quaint?) or in Superior, both on the Nebraska/Kansas border, for lunch soon.  I'll probably just bring mine as you never know what the accommodations will be.​

Answer to your answer ... that's right! It was LIVER and ONIONS, don't think I've had them since, yummmm ... they were good!  I asked Bob if he remembered that day and what we had, and he did ... he has good memories of a wet ride and good times!
As for doing co-lunch near the Nebraska-Kansas border and bringing your/our own lunch, what a funtastic idea!  We could social distance in the shade of a tree or whatever ... after an attempt of "free-ing" things up a bit here in Kansas, "things" seem to be ramping back up a bit here in our area, the social (anti-social?) media is going crazy wild with "mask vs. mask", etc ... but you know all of that.
I've been thinking how I could put my morning coffee in a thermos, ride out and set on a bridge bannister over a creek somewhere to give me an excuse to get out in the early hours during the cool part of our summertime days.
A friend who is a self-described "morning person" thinks I should give it a try, says it is great, that getting-up early.  I'm not sure I buy that, but my current day rides, for sure, are suffering now that it is near 100 degrees in the afternoon and evenings.
Who out there does that, riding in the early hours?  Any suggestions?  How do you get yourself up at whatever hour?  That's the tough part for me!  Ideas?

FOR SALE:  2018 Suzuki DR650
Less than 3000 miles.   $5200.00
Equipped with:
Procycle rear rack
Ricochet aluminum skid plate
Seat Concepts comfort seat
Zeta handlebar hand guards.
A manual fuel petcock (also have the stock one).
Has stock tires which are about 75/25 street/dirt combos.
I made an aluminum auxiliary mounting plate which bolts to the ProCycle rear rack. It is configured for mounting Roto Pax fuel containers. This is included along with a 1.75 gallon Fuel cell.
Bike is professionally cared for.
Great bike, simple and fun. Ridden almost exclusively on tarmac with occasional ventures down local gravel roads.
Brian Kelly, #5436.
P.S., if interested in the bike, 540-955-2848.
Thank You​


I hated HISTORY in school, but love it now. Go figure?

It all started late in 1985, this idea of a club for Four-Stroke Single Cylinder Motorcycle Owners.
I was riding a brand new factory-fresh Honda XL600R ... a red, white, and blue 600cc Single with an advertised dry weight of 295 pounds. It sported 17" gold rims on both ends shod with fat (for the day) sticky Metzler street tires, Magura clip-on stubby handlebars installed upside down, and a sporty low-mount front fender off a Honda Interceptor ... a "Motard" by today's definition and I was years ahead of the "Motard Movement" of modern times.

Friends told me I ruined a perfectly good dirt bike, I contended that I had created a sub-300 pound street/road bike with a 600cc Single Cylinder ("Thumper") motor.

William Least Heat-Moon, author of BLUE HIGHWAYS, begins that particular book with a statement that said, "Beware of thoughts that come in the night." ... The idea of a Thumper Club came to me in that very fashion. I remember the dream well, and that it came to me in that half-awake, half-asleep time in the early morning hours when all thoughts make sense and there are no impossibilities.

It was while in this euphoric mood mode that I decided to assimilate a nationwide coalition of motorcyclists who shared that same strange, almost unexplainable fancy for the Four-Stroke Single Cylinder Motorcycle. Not content with that basic decision, I continued on to make the major decision of committing $5,000 (yet to be earned!) and/or three years of my time to this project. Now, at this point, I'm tossing and turning, unable to go back to sleep, yet not really willing to wake-up, probably fearing that my inspiration wouldn't endure the harsh reality of daylight! Finally I decide to proceed, but with the theory that I'd evaluate my progress at the point where either the three years or the 5,000 bucks ran out, whichever happened first. With that truce in mind, I happily drifted off into a deep sleep, awakening in the morning refreshed.

My feet had hardly hit the floor before I had a plan of action. The club would be called the FOUR-STROKE SINGLES NATIONAL OWNERS CLUB, the now-familiar "FSSNOC" acronym (pronounced Fizz-Knock or the letters F - S - S - N - O - C) was an almost instant by-product of the lengthy title.

Our first member, a definite mile-marker in any club's history, wasn't to happen until April of the next year, 1986. I had related my dreams and plans to a fellow worker at the Honda-Yamaha motorcycle shop where we both worked. His reaction was something like, "Uhhhh, yeah, that's really cool. Well, I better get back to work ..." and he walked away. Not what I wanted to see and hear! Later that same day, he approached me with his folded fist extended, knuckles-up, and, grinning, said, "Go for it! Count me in. I'll be member number one, here's my twenty bucks!"  WELCOME TO THE CLUB, FSSNOC #001...

Incidentally, that is how I came to be known as FSSNOC #000, or "Triple Zip" as a fellow member later labeled me.

After that rather heady moment of getting the first member, our club grew at an amazingly slow rate. The $5000 went at an alarming rate. I remember spending $680 for an ad in three issues of CYCLE magazine and realizing only two memberships. That was a heart-breaker! I quickly learned to beg for cheaper rates in those publications that would listen and react with compassion.

May 15, 1986 ... a RED LETTER date!  We received an application for membership from Washington state, he became our first Out-Of-State member. I was ecstatic! He remains an enthusiastic member to this day.

January 1, 1987 ...  After our first year in "business", we had signed on 103 Thumper enthusiasts! In July of that first year, we had introduced the "FSSNOC", our club newsletter. Issue #1 was a 10 page, 8 x 11 inch leaflet featuring an XT250 Yamaha on the cover. I remember pricking my fingers repeatedly with those metal staples that held these simple publications together ... ahhhh, good stuff! (Back Issues are available to club-members at 4 issues for $20, post paid by the club.)

In the Summer of 1987, our newsletter was renamed THUMPER NEWS to more closely reflect our purpose and its content. In 1988, we started the C A M List, meaning Contact Another Member. This was a list of members who wanted to be available to other members for social and service purposes.

THUMPER NEWS has grown from that ten page leaflet to a magazine style publication suitable for your personal library or coffee table. Page count is usually 24 to 32 pages featuring want ads, trip stories, road tests, event schedules, all put together in a warm vintage style ... and thankfully, no more nasty staples!

Rallies and Events ... started in 1986 and continue as we speak, see the Events Section of this website. To date FSSNOC has hosted events, now called "ThumperCafes" throughout the continental USA, in addition to a gathering in Tok, Alaska in 2001 and two tours of Old Mexico in '91 & '92.

Since those tentative days in 1986, we've enjoyed serving thousands of thumper enthusiasts, many of which remain in the club today ... may we add you to our list of members?

I hope you've enjoyed this mini-version of the early years of FSSNOC growth and activity. The important thing to remember is ... we wouldn't be here today without the support and contributions of those early members, many who are still active participants in the club to this day. Let me use this opportunity to express our heartfelt THANKS to all those members who have supported our club through the years. Little did I know that the "thought that came in the night" would have such an impact on my life and on the lives of our members. In light of that, my comment would be...

....this concludes our Club History Page. Please visit our other pages....